Menu
Get a Free Demo

Increase Your Labor Force by 50 Percent

In today’s environment, contractor’s number one problem is hiring and keeping good labor. This was confirmed in a recent survey that shows 78% of contractors reporting they can’t get enough labor to sustain their growth.

Contractors trying to grow their company and handle the work they have, often overlook a simple solution.

Standing back and looking at the situation, workers produce Gross Profit. Gross Profit is defined as the Profit after all direct costs, also known as Cost of Goods Sold (COGS), have been deducted.

Let me show you what I mean. In this example below, COGS includes materials, labor, and labor burden. The numbers we are using are for easy math only, most industries make higher Gross Profit.

Let’s say a company with 10 men produces $10,000 in Gross Profit in one week. Each man would have contributed $1,000 of Gross Profit to the company. To handle extra work and produce more gross Profit, the usual solution is to add more men. In this case, 5 more men should result in an additional $5,000 in GP, or $15,000 in total.

Unfortunately, that’s not the case. The five new men hired are untrained, unfamiliar with the work systems and get in the way more often than they help. By evaluating companies that have fallen for this mistake, we discovered that their efficiency decreases and each man no longer brings $1,000 a week; it’s closer to $800 a week. But we will leave it at $1,000 per man per week.

As you add more men, you also need to add more equipment, more trucks, more personnel to supervise the extra men and have a higher risk of increased workers comp claims.

Your goal is to increase your Gross Profit from $10,000 to $15,000. In the first example below, we increased the workforce by 50%. But there’s another way that’s right under your nose. It’s easier and more beneficial for your company’s growth and culture. That’s covered in Example #3.

Over the years we have studied this problem and have found that without question, it is far better to increase the crew’s efficiency and work more hours before you hire more people.

The way I discovered this was largely due to a software tool I created called THE WHAT IF TOOL.

This tool allows a construction company owner to pose challenging questions which would take hours of calculations to determine the answer. Here’s an example of some of the questions that you can pose:

One can pose just about any business question with THE WHAT IF TOOL in our AIMM Software.

Now let’s use the WHAT IF TOOL to ask our initial question;

Is adding 5 new men more beneficial than training and bonusing my existing crew to get the job done on time and having them work overtime?

Let’s clear a couple of terms before we go on.

GPMD = Gross Profit per Man Day, or how much GP each man makes for the company each day

EGPMD = The Estimated GPMD in your estimate

AGPMD = The Actual GPMD is what the men actually made 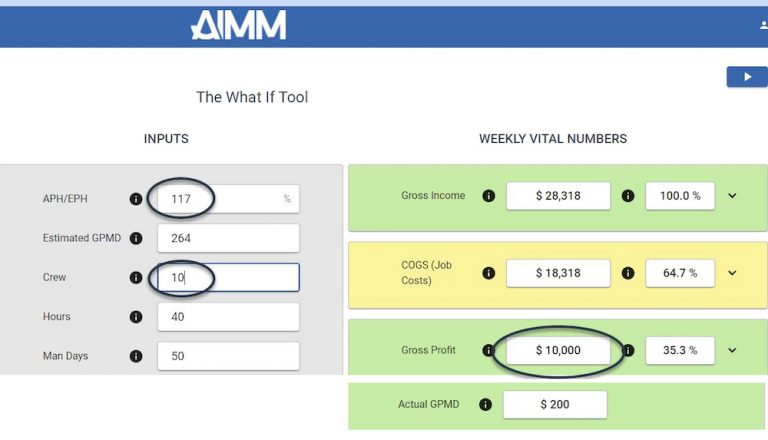 In example #1, we have 10 men making $200 GPMD, working 5 days. Each man produces $1,000 in a week, and together they produce $10,000.  As I mentioned before, a company on average should estimate and produce higher numbers than in this example, but I’m using these so the calculations are easy to follow.

We have discovered with our own crews that if they are not given a targeted number of hours to get the job done, and are not rewarded for it, they typically end up taking about 20% longer than estimated. In the WHAT IF TOOL example above, we are assuming a crew will be 17% over the estimated hours.

Now, what if the original 10 men completed the job on time and worked an extra 10 hours a week? In example #3 the overtime rates for each man are considered.

Some common excuses we hear after showing contractors this revelation is:

Realize you have an extra $6,500 to work with if you used Example #3. How much of that would you need to pay each man and your supervisor to get them to work an extra day?

We have found that paying out anywhere from 10% to 20% in bonuses is a number that can gain some traction with your crews and supervisors. In example #3 above, 20% of $6,500 would be $1,300. Use that to split amongst your supervisor and crew. There is often a tendency to divide it equally amongst everybody participating but I found it more effective to pay a bit higher bonus to the people driving the crew.

The result: An increase equivalent to increasing your crew size by 50%, without having to hire more men!

Using the AIMM System, contractors can easily track their numbers in real time and put in a successful bonus program. Throughout my 20+ years as a contractor, I’ve implemented dozens of successful bonus programs that have increased my crew’s efficiency. No matter your companies situation, you can implement a bonus system that will increase your crew efficiency and your net profit.

For more information about the WHAT IF TOOL, bonus games and how to add 50% to your GP without adding a new worker, send us a message below.

Get In Touch and Get Your Questions Answered